4th April 1968. Four years after receiving the Nobel Peace Prize for his dynamic leadership of The Civil Rights Movement, Martin Luther King was assassinated. Set the night of his shooting in a Tennessee motel room, this new solo play explores the extraordinary man behind the legend. 'The ultimate measure of a man is not where he stands in moments of convenience, but where he stands at times of challenge and controversy' (Martin Luther King Jr). Written and performed by Christopher Tajah. Songs sung by Paulette Tajah. Director: Bernie C Byrnes. Image: Remy Hunter Photography.

This show was part of our 2019 Edinburgh Fringe Programme 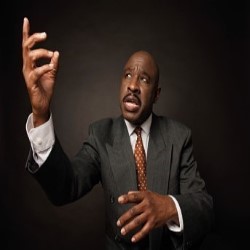